Oh No! Not Another NYC Food Blog!

Yes, yes it is. Mwahaha.

One part cool architecture (if you like sleek & modern), one part cantina bar bordering Madison Square Garden near Penn Station. 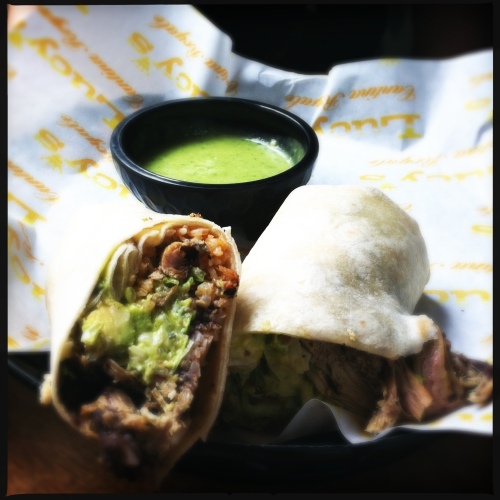 My DH had the Roast Pork Burrito with garlic-cilantro marinade, refried beans, mexican rice, lettuce, pico, jack cheese, sour cream, and guacamole. The meat was nicely seasoned and tender and the dish had a nice balance.

Not his all time favorite (Moe’s), but a decent substitute. His burrito also came with a really nice salsa verde. It wasn’t the green crack Moe’s serves, but it was good enough to stave off the proverbial shakes. 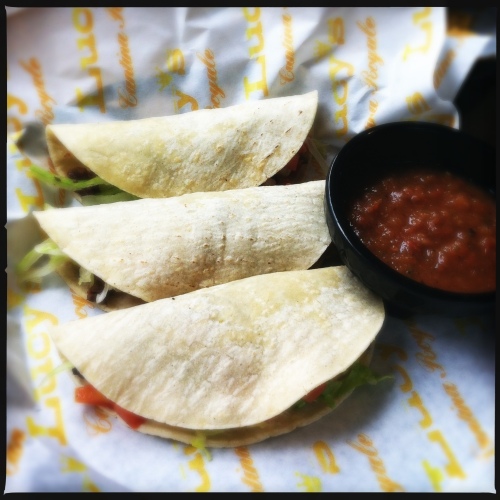 I had the Skirt Steak Tacos with chipotle-tomato marinade, pico and lettuce. My meat was also seasoned nicely and my tacos were good. Refreshingly cheese-free, as well. 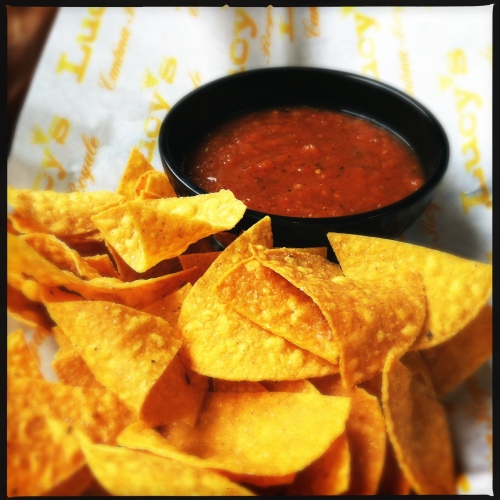 We split an order of Paper Bag Tortilla Chips with Tequila-laced Salsa (our dishes did not come with chips). The tortillas had salt! And they weren’t greasy!

The salsa was really nice – smoky, spicy, bright, really deep — the tequila was very understated and blended well enough that my tequila-adverse self didn’t ick out.

I also had Tropical Tea! I was so excited the tea came out tropical-flavored. I adore this type of tea and had resigned myself to having left it behind in South Florida after the move. 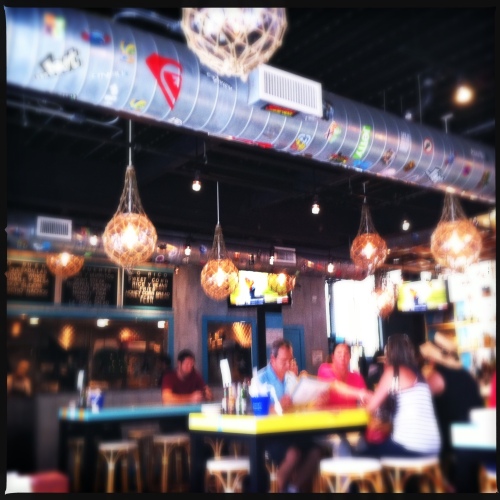 The downstairs eating area is bright and beachy with a fresh Baja vibe.

Be forewarned: if you are planning on imbibing some of this bars’ selection of tequila; the bathroom is down 3 narrow flights of stairs you share with kitchen staff. It’s doable, but might be dicey if drunk in heels.

Not the best, but not totally horrible. I would imagine it might be next to non-existent at night, but that is purely speculation. Our particular server wasn’t the most attentive I’ve ever seen during a lunch service.

We were first attracted by the rooftop bar – it is really eyecatching and looks like a nice place to lounge in the shade on a sunny afternoon. Apparently they have ‘top of the hour’ tequila shots & fishbowls up there, and it’s open year-round. I have a strong feeling my opinion of this place would change dramatically after 4 pm.

A cautious 4 out of 5 on food alone with a strong possibility of unbridled douchebaggery at happy hour and beyond.

EDIT: We revisited recently (May 2013), and the food is not at all what it once was. The salsa was ok but ketchupy, the tacos were bland, and the burritos were tasteless. The service has also gotten worse. 2.75. Still edible, but not anything special.